1.    The VIP Course trains security officers in the VIP security, in accordance with the Israeli Security Concept and the use of security tactics and strategies at a governmental level

2.    The academy performs as a comprehensive center, which is designated to develop and implement training study programs for security agents and combatants, who protect VIP’s and their surroundings.

3.    The training program is an exclusive one, which emphasizes the practical physical aspect in that field. The main purpose of the program is to prepare the trainees towards the analyzes of threats while preparing an appropriate protecting plan according to the VIP and his surroundings.

4.      The course is fully approved and recognized by the ministry of defense and the Israeli police.

5.       The course is taking place in Israel, however it is also possible to implement the course in the country requested by the customer.

The price will be decided according to the country of implementation and the attached conditions to implement the course. 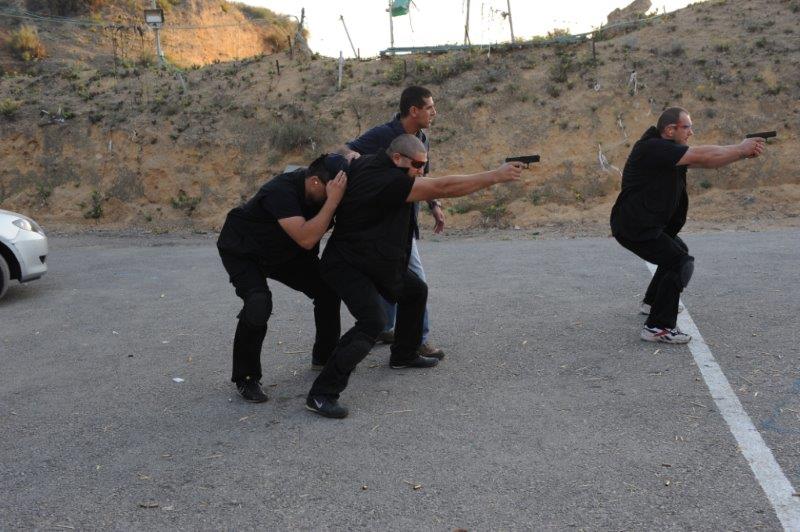 The course consists of a number of additional subjects which are essential.

·      Shooting in various situations in a variety of weapons.

·      Principles of protecting VIP’s in motion by foot + vehicle

·      Simulations and practicing with a protected VIP

·      Security on travel and traveling abroad

·      Simulative drill combined with a vehicle

·      Identifying and use of technical equipment

·      The adversary and his modus operandi

·      Identifying of explosives and sabotage

·      Planning security on a command level

Specification of the shooting chapter

·      Knowledge and distinction of different weapons

·      Entering positions and shooting during

·      Shooting in a standing position

·      Shooting in a kneeling position

·      Running – breaking and turning around

·      Neutralizing an aggressor + recovering the VIP

·      Evacuation of the VIP to distant cover

·      Shooting against a number of opponents

·      Shooting from a vehicle in motion and motionless

·      Evacuation of the vehicle from line of fire

·      Shooting through doors and windows

·      Releasing from seizures  +strangling the opponent

·      Defense against a knife attack

·      Drilling attacks on a security agent/VIP

·      Neutralizing the opponent by a peripheral attack

·      Overcoming and recovering from attacks

·      Theory and practice exercises of controlling the vehicle in emergency situations

·      Principles of driving in a convoy

Specification of the sabotage chapter

·      Identification of explosives and mechanism

·      Activation, technique and accessories of explosives

·      Methods of search from vehicles and buildings

Security Concept and The Five Elements

The Adversary and His Modus Operandi

Equipment used by the adversary

Description of actual events from the past, which demonstrate different methods  used by the adversary.

Learning about field files and their importance in security

The tactical importance of selecting observation point and firing/fighting point

Security while Driving & the Vehicle as a weapon

The uniqueness of the situation; handling high-speed situations; tactical work; thinking while moving through traffic; use of the vehicle as a weapon.

Principles for understanding sabotage as a modus operandi of the adversary and fundamentals of identifying suspicious objects and explosives.

Concluding Exercise including all of the elements that have been studied in the course.